The Princess’s Bride (Pirates of Flaundia #1) 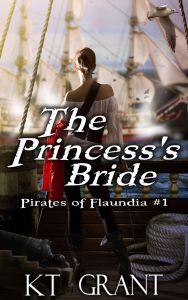 (Lesbian Historical Romance. Previously published in 2010, and revised and re-edited)

Daisy de Fleurre, an exiled princess from a faraway land, longs for true love. She almost experienced that at the tender age of eighteen, when she and her servant Chelsey engaged in a smoldering love affair one brief summer before they were separated forever. Eight years later, Daisy is engaged to a man who wants to offer her the world. But she still longs for the woman she has never forgotten.

The dastardly lady pirate C.W. Dread, lives for revenge against Lord Humphrey, the evil man who murdered her family. She lays plans to kidnap Humphrey’s fiancée, hold her for ransom, and introduce her to the delights of the flesh. Then her revenge will be complete! But Dread is in for a shock when her prisoner is a ghost from her past who she once adored deep down to her very core.

Lord Humphrey will stop at nothing to destroy Chelsey, and possess Daisy for his own nefarious means. Unaware of what awaits them on the open seas, the two former lovers realize their passion, although once forbidden, is as intense and turbulent as the ocean Chelsey calls home.

The rocking of the ship and the sounds of seagulls calling to one another woke Daisy from her slumber. She blinked and shifted to her side as her stomach churned. She took deep breaths to keep from vomiting on the comfortable bed she lay on.

She sat up, and the room spun so, she dropped her head in her palms and swallowed as her stomach rebelled once again. Her cheek throbbed, and her head felt as if it was going to burst open. She moaned and gingerly touched the sore spot on her head. A lump about the size of an egg stung when she poked it.

“Where am I?” She lifted her head again. She blinked a few more times to bring the room into focus, and when she could see clearly again, she looked around in wide-eyed fear. This was not her bedroom.

Her mouth was dry, her lips chapped. No amount of licking them would give her the relief she needed. She was saddened by the sight of her beautiful ball gown all torn and encrusted with grime and other unrecognizable stains. Her hands were also smudged with dirt, and a few of her nails were broken.

When she noticed her diamond engagement ring and necklace were missing, she searched the bed in a wild manner, praying her jewelry had fallen off among the sheets. All she found for her troubles were a few pieces of lint and long, dark hairs.

She groaned loudly, tunneling her fingers through her hair, and scrunched her nose as the scent of horseflesh rose from her dress. Before she could stop, a yawn escaped. As she opened her mouth wide, the right side of her face burned, and her lip stung horribly.

She pressed a finger to her mouth, and it came away bloody. Trying to remember the last few hours, she crawled slowly across the large bed covered with many multicolored pillows and coverlets. She had just set her foot on the floor when the door opened. She backed away and landed up against the iron headboard as a tall person dressed in all black came in holding a tray filled with fruit and bread. She covered her mouth to hold back a squeak when the person turned around, set the tray down on an empty space on the desk, and looked at her.

“Ah, I see you have finally awakened.” The masked woman smiled, taking a step toward the bed.

She held up a hand and lifted her face bravely, speaking the first words that sprang to her mind. “You…you have stolen my precious jewels!”

The woman shrugged. “Perhaps I have. So what?”

Her mouth dropped in dismay. “Do you realize how expensive—oh, what is wrong with me! Of course you don’t care one bit what I think. You enjoy pillaging priceless jewelry and other trinkets for your own selfish gains. I am just one of your many victims.”

“S-stop right there, you scoundrel!” she screeched.

Her finger shook as she pointed. “I will scream.”

She flinched as the woman let out a husky laugh. “Go ahead. We’re miles out at sea, as you can tell. It’s only me and my boys here. They’re used to hearing a woman’s screaming coming from my cabin.”

She pressed a palm to her chest and frowned. “You apparently know me.”

“But how.…” She glared at the woman standing only a few feet away, taking in her dark boots, the tight fit of her breeches, and the jagged scar and black mask covering her eyes and head.

Suddenly, she knew who stood before her.

“You’re her…the nasty lady pirate Dread all the papers talk about.” She sat up on her knees and looked at Dread in awe and trepidation.

“Nasty?” Dread sounded unconcerned. “You could say that. What else do the gossip rags say about me?” She took another step closer.

“How you destroy other ships and terrorize innocent people, including my fi-fiancé Lord Humphrey.”

Dread spat on the floor. “I can’t believe you’re going to marry that jackass.”

She grabbed the edge of the headboard to steady herself. Closing her eyes, she became woozy in part from fear because she was at the mercy of this pirate queen whose rule was law on this vessel.

Author of "out of the box" romances. Think of sexy, sweet and everything in between.
View all posts by ktgrant →
This entry was posted in Uncategorized and tagged KT Grant, Pirates of Flaundia, The Princess's Bride. Bookmark the permalink.
Loading Comments...
%d bloggers like this: