Wasting Away in Deadsville 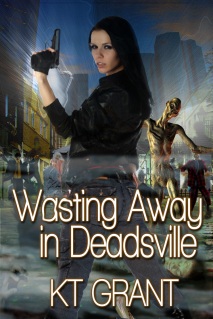 Available for .99 cents (Free to read in Kindle Unlimited)

Synopsis: What’s a vampire like Ginny to do when she’s stuck all alone in New York City surrounded by mindless, rotting zombies? The zombie apocalypse has occurred, and Ginny’s stuck drinking zombie blood for nourishment. She’s also bored and lonely with nothing but her thoughts to keep her company. But then she finds a beautiful human woman, unconscious, on a boat and ripe for the taking. Now Ginny has a tough decision. Does she gorge herself silly on the human’s precious blood or give her captive a precious gift-immortality?

Who’d have thought after the world ended it would be boring as hell? The zombie apocalypse was exciting as watching tumbleweed roll down Route 66.

“Someone kill me!” Ginny yelled, lying on top of a rusted taxi in the middle of what used to be Times Square. At least one benefit about the world going to shit was with no electricity she could view the stars perfectly. She would have preferred the sounds of owls or cicadas instead of the relentless groaning of the mindless undead as they dragged their feet around.

Sighing, she glanced at a male zombie standing way to close with breath like road kill. She grabbed her shotgun, held it up to its forehead and blasted it away. It fell to the ground as the shot echoed off the rusted, gutted buildings. She was beyond bored after thousands of zombie kills under her belt.

Her stomach released a growl. She was so sick of this shit. Sick of having no one to talk to, and sick of all the rotting, decaying bodies. Air freshener could only cover up so much. Drinking undead blood sucked in ways she never thought possible.

She sat up and stretched, wiping away her jeans splattered in zombie brains. To think she once drank from the most rich and satisfying of blood…real live human blood!

If she’d left with the others years ago, she wouldn’t be stuck in this predicament, all alone on an island that used to house millions of blood donors for her choosing. Now she was left with the dregs and not thrilled about the possibility of feeding on rotting, decaying zombie blood for the rest of her life.

“Knowing my luck, I’ll probably turn into a walking corpse any day now from the amount blood I’ve ingested from your kind over the past five years. Right, Laura?” she called out to the one armed female zombie standing a short distance away. She’d named her Laura, after her dear departed sister, who’d hung herself as Atlanta burned during the war between the North and the South. She had no idea way this zombie, out of the millions, followed her around. She could’ve snuffed out Laura’s pathetic, mindless unlife, but it made her feel not so lonely seeing a familiar face now and again.

She tapped her gun against the car. Thousands of zombies shuffled around, bumping into one another without any purpose. Day in and day out it was the same. She needed a change in scenery before she ended up shooting herself in the head. She had no other option but to pack up her belongings and drive to Canada. The last she heard was a vampire commune had been set up there using any remaining humans as livestock.

She glanced up at the sky again. A few hours left until sunrise. She’d start heading back to her brownstone and perhaps treat herself to her one of her precious bags of human blood she had on tap. She jumped off the taxi and pulled her shotgun over her shoulder. She’d hold off blowing any other zombies away. That was what the weekdays were for anyway.