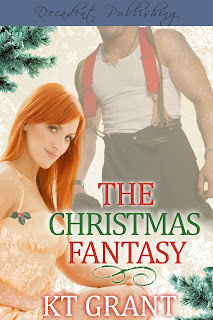 Synopsis: On a mission to lose her virginity before her thirtieth birthday on Christmas Day, Mandy Lockeheart plans to seduce the only man she’s ever loved, her brother’s best friend, firefighter Jackson Montgomery. With the sexy new body she’s worked hard to earn, she’s certain she can convince him to fulfill her fantasies.

When Mandy comes to him with her sexy proposal, Jackson can’t refuse her adorable seduction. Unfortunately, Mandy’s brother doesn’t want anyone playing around with his baby sister. Jackson must choose between respecting his friend wishes and making love to his perfect Christmas present.

Between Mandy’s occasionally poor body image and Jackson’s honor, the lovers must fight to realize their Christmas Fantasy.

“Hey Mandy. Need to use the bathroom?” Jackson rubbed the back of his neck and looked toward the stairs as if he wanted to make his escape.

Mandy stepped away from the wall with her arms behind her back. “Not right now. Actually I need to use something else and you’re the only one who can help me with it.”

Mandy’s hands came up and she pushed against his chest. He stumbled back into the bathroom. Before Jackson could move, she closed the door, grabbed his glasses off his face and held them behind her as she leaned against the door.

“Amanda, stop with these games. I’m tired and want to go home. Give me my glasses back. What if someone needs wants to use the bathroom?”

She shrugged, unconcerned that he was upset. “So what? They’ll see the room is occupied and go downstairs and use the other bathroom. We needed a moment of privacy.”

The suspicious look Jackson shot her way made her stomach jump, and not in that, I’m turned on a good way.

“In a bathroom during a party? What do you need help with that couldn’t wait until tomorrow?”

Her tongue poked out of her mouth and she took a deep breath. “It concerns my thirtieth birthday and my Christmas gift combined. I’ve decided the one thing I want this holiday is to lose my virginity. And I want to lose it to you.”

Mandy glanced back up at Jackson. The look on his face would’ve been comical if not for the sudden fluttering in her stomach. He stood there with his mouth literally hanging open and sat down on the toilet. He rubbed his face and moaned. Mandy was trying her best not to be too embarrassed. If he said no, she would never live it down.

“What…I…shit.” Jackson could barely get out one word let alone full sentences.

“What’s wrong? You’ve got to be joking.” Jackson glanced at Mandy. “Why me?”

“You’re the only man I trust besides my brothers and father. You have to know I’ve cared about you for a very long time,” she said softly, suddenly feeling very shy.

It’s now or never. She left his glasses on the sink and walked to stand in front of him. Before she lost all nerve, she moved her fingers through his hair. Jackson’s eyes fluttered.

“I think we need to stop thinking about the what ifs and just act. I’m sick of going over the consequences.

And I think you should also.” Before Jackson could argue, Mandy dropped down onto his lap, straddled him and gave him a deep kiss on the mouth.

Mandy didn’t have a great deal of experience in kissing, but what she lacked, she made up for in enthusiasm.

The moment her lips met Jackson’s, her nipples grew hard and poked against the bodice of her dress.

Jackson grunted and wrapped his arms around her. “Sweet,” he murmured and brushed his tongue across her bottom lip.

“Huh?” Mandy nibbled the side of his mouth.

“You taste like strawberries and chocolate.” He pulled her in close, giving her a kiss she’d always dreamt about.

Author of "out of the box" romances. Think of sexy, sweet and everything in between.
View all posts by ktgrant →
This entry was posted in The Christmas Fantasy and tagged Decadent Publishing, KT Grant, The Christmas Fantasy. Bookmark the permalink.
%d bloggers like this: