Down Goes the Shade and Out Comes the Cravat *PG-13*

Based on the BBC’s 2004 adaptation of Elizabeth Gaskell’s North and South.

Epilogue: Takes place after the train scene between John and Margaret 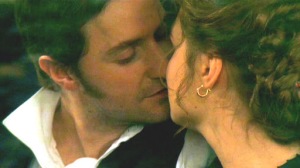 As the train rode off in the distance, Margaret glanced out the window. She was trying her hardest not to smile too much, or give into the temptation to wrap her arms around Mr. Thorn-, well he was John to her now.

She could feel his eyes on her and turned back to look at him. John’s smile was broad and his eyes were sparkling. He looked so happy! Margaret could not help it and had to smile back in return.

Before she could speak, John reached down, took her hand and kissed it the same way he had done earlier on the bench at the train station. She sighed and closed her eyes. After a few seconds she felt John rub his nose against her cheek. Then he rubbed his cheek against her own.

She opened her eyes and looked at him with great love. “Yes, J-John.” She stuttered over his Christian name feeling unsure, so unlike herself.

John chuckled softly. “I love saying your name out loud… Margaret. I have whispered it to myself when no one else is around, late at night.”

Margaret was speechless at first but than an impish look came over her face. “Is that all you were doing late at night?” she asked innocently.

John laughed a bit louder this time. “Oh my dear, if you only knew.” And with that he gave her another passionate and intense kiss, much like the one they shared at the station.

Margaret joined in, trying to hold back her moans. She didn’t want anyone else to hear and investigate. This was her private time with the one man she would spend the rest of her life loving and making sure he smiled everyday. She reached up blindly to caress his neck. “I love you.”

John, in turn, sighed. “And I love you my Darling Margaret.”

After a few heartbeats they began kissing again. Finally, they broke their kiss, but still held each other close rubbing their cheeks against each others.

Margret licked her lips. “John.” She said this time without stuttering. “I have noticed you are not wearing your cravat.”

John pulled back a bit and placed his hand over Margret’s, that lying on his shoulder. “I have worn one for so long that I have never thought twice about it. But as I rushed to find you, I felt free, more so than ever before and took it off. Just feeling your caress against my skin is enough reward.”

Margaret gave John a sweet kiss on his cheek. “So, no more cravats for you, sir?” She asked.

John reached down into his pants pocket and took out what looked like a cravat.

They both chuckled as he placed it in his lap.

“There are other things one can do with a cravat rather than just wear it around one’s neck.” He stated as his eyes grew a bit more heated.

Margaret looked at him a bit confused. “Oh really?”

John moved in even closer and slowly twined the piece of linen around Margaret’s hands. He whispered softly in her ear. Margaret gasped over his words and started to blush. John sat there with a small smile on his face. Margaret glanced down at the cravat in her hands for a moment and then looked up at the man she trusted with her life.

“Show me.” Was all she said and sat back more comfortably in the seat. John didn’t say a word as he slowly started to unbutton the top of Margaret’s dress. But before he reached the second button, she halted his progress. She reached over to pull the shade down over the window and as John caught on; he quickly reached over to the shade and pulled it down over the glass to their compartment door.

As the train carried on, no one walked by where John and Margaret where sitting. If they had they would have heard laughing and some small male and female moans for the remainder of the ride towards their future as man and wife.

Author of "out of the box" romances. Think of sexy, sweet and everything in between.
View all posts by ktgrant →
This entry was posted in North and South fan-fiction, PG-13. Bookmark the permalink.